The number 20 on a ribbon

This was Josh Gibson’s number who was a catcher in the Negro Leagues. He played 15 years and got 900 homeruns!

Birmingham, Alabama was an important city in the Civil Right movement. Dr, Martin Luther King Jr. and others helped to organize nonviolent protests to fight segregation between White people and Black people. These protests contributed to the Civil Right Act being passed in 1964 that made it illegal to discriminate against people on the basis of their race.

Memphis, Tennessee also played a big role in the Civil Rights Movement. When Dr. Martin Luther King Jr. was visiting Memphis to help organize protests and give a famous speech called “I’ve Been to the Mountaintop,” he was assassinated.

Today, Memphis is home to the National Civil Rights Museum.

These footprints are running around the baseball diamond, like in a baseball game.

This was Satchel Paige’s number when he was a pitcher for the Kansas City Monarchs. Baseball was segregated for a long time so Paige played for the Negro Leagues team. He was the first player from the Negro Leagues to be elected to the National Baseball Hall of Fame. 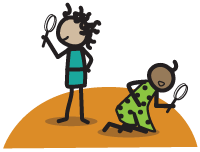